In the September 2021 article by Alison Spiegel the subject is whether or not people out of religious conviction should be able to refuse a vaccine, especially the current COVID-vaccines. She writes that ‘it could be a slippery slope to ban religious exemptions altogether’. But then goes on to quote buddhists who support vaccine mandates. She quotes Soto Zen Priest Duncan Ryuken Williams because of ‘Buddhism’s historical focus on preserving life and protecting one’s community’. An approach ‘for the common good’.

I have heard this argument ‘for the common good’ time and time again the last 19 months. And it always reminds me of when I was little what my father used to ask me when one of my friends would do something stupid: “If she jumps into a pool and cannot swim, are you going to jump after her – while not being able to swim?” In other words: if somebody else does something stupid and/or dangerous and causes suffering, are you imitating that or are you thinking for yourself?

Yes, we do want to do something ‘for the common good’. Yes, we want to be good Buddhists. Yes we want to protect the vulnerable from getting sick and worse. But shall we take a good look at what the real situation is here?
I could have understood this article when the date would have been September 2020 but it is a year later and we have learned a lot. At least I have; has Tricycle?

The situation is that this disease called COVID-19 has a so-called Infection Fatality Rate (IFR) of 0,15%, according to the World Health Organisation (WHO), the CDC and all other official institutions. This means that for 99,85% of the total world population this disease is not deadly. It is also already well known that 98% of the total world population doesn’t get sick or has hardly any problems with dealing with this disease. It also means that COVID-19 has almost the same deadliness as the common flu. And all these data was already well known a year ago.
That is very hard for people to accept, because politics and media have told us 24/7 how dangerous this virus is and how fearful we should be, and that there is only one solution.
But the facts are the facts and the bottomline is that this is (thankfully) not the dangerous virus it at first seemed to be.
Now would you have urged the whole world to get mandatory vaccinations for the flu, without religious exemptions? No, you wouldn’t. You would have offered this (like we already do) to the old and vulnerable. So why is this different?

“As a matter of alleviating suffering, we Buddhists should not be hesitant about trying to assist with healing a global pandemic. While we must have a flexible and compassionate mind to allow exemptions for those for whom a vaccine is medically inadvisable, we can certainly support mandating the currently best-known method to create a healthier community”, Williams says.

Yes we should help with assisting, but these ‘vaccines’ are not the best-known method. The best-known method are working medicines, which are available. And which have been available from the beginning. From April 2020 onwards thousands of doctors across the world have healed hundreds of thousands of people from COVID-19 using readily available medicines.
But as soon as the WHO, pharmaceutical companies and governments found out that these doctors were helping and healing people, these medicines were forbidden. Why? Because there is a rule saying that vaccines cannot be developed if working medicines already exist. The whole businesscase for those vaccines then is non-existent. And of course vaccines were the only way out, according to the WHO and other stakeholders.

So the working medicines were discredited, they were considered dangerous, doctors were getting censored in every shape and form, but the fact of the matter is that in States (Texas, Florida) and countries (India, Ecuador and 18 others) were these medicines were and are being used, the number of people in hospitals and deathbeds were way down.

And let’s have a closer look at these vaccines, shall we? Because if they are safe and effective, even when there are perfectly working other medicines available, then you could still choose to get one of them to help out, couldn’t you? Yes, you could. But that is just the problem, these vaccines are not safe and effective.
First of all: they are not vaccines. They are gene therapies, they work in a completely different manner. The original definition, prior to 2015, stated that vaccines “prevent…disease.” Starting in 2015, the definition was altered to say that vaccines “produce immunity,” without necessarily preventing disease. After the Covid-19 vaccines were introduced, and it was discovered they do not necessarily “prevent disease” or “provide immunity,” CDC altered the definition of vaccines again to say that they merely “produce protection”.

Now if you have a closer look at the ‘produce protection’ part, the manufacturers of these vaccines want you to believe that you are really protected by taking them. But then you need to know the difference between the so-called relative risk reduction and absolute risk reduction. Without going into too much detail here, the absolute risk reduction is the figure that you want to know, because that tells you how effective the vaccine really is in preventing you to get infected. And, mind you, it tells you ONLY about the risk of getting infected, NOT about whether or not you get sick, how sick you will get, or even if you will die.
What do you think that the absolute risk reduction of the vaccines are? The average is 1%. So if you decide to be a good Buddhist and get the shot the risk for you to get infected goes down only one tiny percent.

By now the main stream media on TV and newspapers cannot hide the fact anymore that even though you are fully vaccinated you still can get the disease (so you don’t really protect yourself) but you are also infecting others. It makes hardly any difference whatsoever if you have taken the shots or not.

So there are better medicines available that really work, and these vaccines are not really effective at all. But I could still decide to get them ‘for the greater good’ because they are safe, right? Wrong!
At the present time, end of October 2021, the reports of COVID-vaccine related deaths, illnesses and horrible adverse events, are staggering. In VAERS, the open database of Vaccine Adverse Events Reporting System, more than 17,128 people have died, directly related to these injections; more than 2,600 pregnant women have lost their child. More than 10,000 people have been diagnosed with myocarditis, which is an inflamation of the heart, a very serious condition. More than 8,400 people have suffered heart attacks. The list goes on and on and on.
And medical experts are saying that probably more than 90% of all real cases are not reported in VAERS, so the real numbers are even much much higher. And this is only for the United States. In Europe, where I live, the official numbers are that in the European Union more than 27,000 people have died in relation to these vaccines-for-the-common-good. More than 2 million(!) people have suffered severe health issues due to the Pfizer, Astra-Zeneca, Johnson&Johnson or Moderna-injections.

Since when do we as Buddhists support child sacrifice? Since when do we stimulate getting heart attacks ‘for the common good’? Since when are we so blind that we say something like “Sometimes giving up one’s rights actually makes a lot more sense than then insisting upon them” like Candy Gunther Brown, professor of religious studies at Indiana University said in the article?

In November 2020 dozens of doctors and scientists started to warn us for all the harm these vaccines would cause (because they are gene therapies and not old-fashioned vaccines) and I started to investigate. Up till now I’ve spent hundreds of hours reading medical journals, listening to vaccine experts like dr. Robert Malone and dr. Michael Yeadon, and seeing all the reports of vaccine injuries and deaths from across the globe. I’ve personally witnessed friends and family members suffer from these clotshots.

As all of these medical data is freely available for all of us to look into, nobody who was interviewed for this article by Alison Spiegel, can hide behind the argument that ‘we didn’t know about the dangerous effects of these vaccines’. Joy Brennan, the religious studies professor, who is being quoted as stating “I go on record as 100% opposed to religious exemptions for vaccination mandates”, is now indeed 100% on record that she can be held responsible for contributing to sincere suffering for all those who are going to be (or are already forced into) mandatory vaccinations, with detrimental effect.

By publishing this article Tricycle is also dangerously close to becoming complicit in these horrific outcomes of (mandatory) vaccinations. 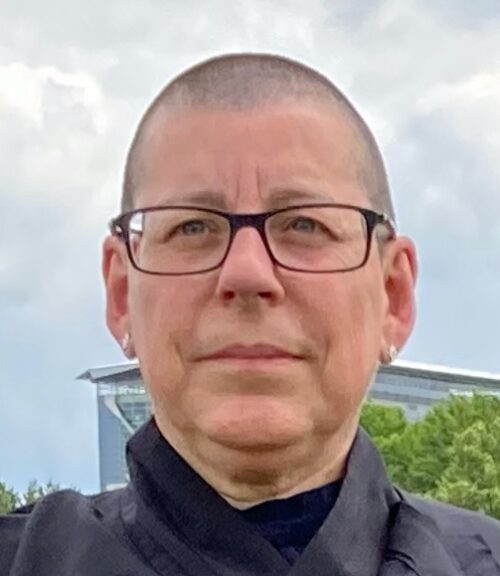 If we really want to do something ‘for the common good’ and be a good Buddhist, we should talk to our politicians and reporters to allow our doctors to use the available medicines, to inform the general public about the harm these vaccines are causing, to build up our immune systems by eating well, getting the right supplements and supporting each other.
But especially we should take a long and hard look at how we are being used in this spiritual war and be very careful not to succumb to propaganda and brainwashing techniques by stakeholders who certainly don’t have our ‘common good’ in mind.